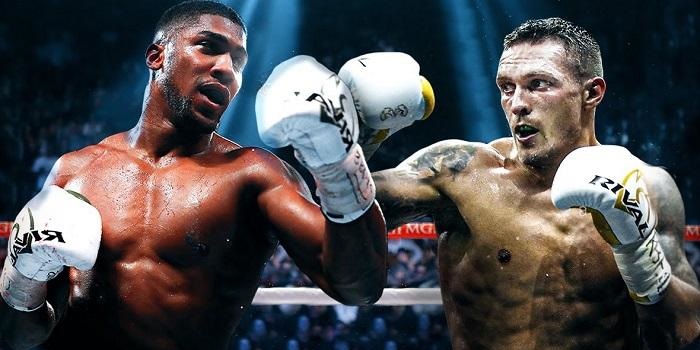 Fiercely patriotic Oleksandar Usyk is in line for a re-match against AJ but the bout has been put in doubt multiple times due to Ukraine's war with Russia. The fight had been plunged into doubt with Usyk joining the military in the defence of his home country.
All parties understood the situation - there are, after all, bigger things in the world than boxing.
Just like the Olympic gold medallist did after his loss to Andy Ruiz Jr in 2019, Joshua wants to right his wrong by facing the Ukrainian in a rematch.
Usyk outpointed and largely outclassed a game Joshua in front of 70,000 fans at Tottenham Hotspur Stadium last year to win the WBA, WBO, IBF & IBO world titles.
Joshua's promoter Eddie Hearn admitted after that his client boxed nowhere near to the ability he would do in a potential rematch.
AJ, meanwhile, said the fight was a learning experience in the post-fight news conference, vowing to gain his vengeance on Usyk.
Since then, the two sides have been negotiating toward a huge money-spinning sequel, with a venue in the final stages of being decided.
It's expected that the fight will take place in Saudi Arabia, with an announcement expected soon.
Joshua will also have a new training team, with the experienced Robert Garcia leading his corner while Angel Fernandez plays second-in-command.
When is Joshua vs Usyk 2?
Originally, Joshua vs Usyk 2 was pencilled in for July 23.
But the bout has been delayed and is set to take place in August.
The fight is going to be held in Saudi Arabia.


The UK is slowly moving out of the clutches of the ongoing pandemic. And citing that, Prime Minister Boris Johnson has come up with a decision. That post-July 19th, fans will be allowed with a 100% capacity inside the sporting arenas.
The Joshua vs Usyk fight is one of the biggest sporting events in the UK this year. And fans do not wish to miss out on a single bit of this fight. Both the heavyweights have kicked off their training camps for this battle. And are eager to entertain their fans surrounding the world.
Can Anthony Joshua treat the UK fans with a win over Oleksandr Usyk? The 24-1 Joshua ranks among the biggest boxers of this decade. He holds a magnetic persona and fights fans are crazy to see him take up the ring space.
Anthony Joshua laughs during the press conference for Andy Ruiz Jr. v Anthony Joshua 2 'Clash on the Dunes' at the Hilton Syon Park on September 06, 2019 in London, England. Anthony Joshua and Andy Ruiz Jr will have a Heavyweight World Title rematch fight on December 7th 2019 in the historical town of Diriyah, Kingdom of Saudi Arabia. That said, fans all over the world and predominantly the UK will be waiting to see how Joshua fares in a highly important fight of his life.
'AJ' will unquestionably look forward to treating his fans with a win, thus lifting their spirits in these tough times. It’ll be interesting to see how the Brit presents himself in a 12-round war against Usyk.
Anthony Joshua's planned world heavyweight title fight against Oleksandr Usyk is set to be staged at Tottenham Hotspur Stadium, Sky Sports News understands. Britain's WBA, IBF and WBO champion has been holding talks about a fight against WBO mandatory challenger Usyk and the 62,000 seated venue has been picked as the preferred venue for the bout, which is expected to be scheduled in September.
Despite the disappointment of Fury vs Joshua being postponed, Usyk vs Joshua still looks to be an entertaining spectacle as the pair have only suffered one defeat between them.
What is good for boxing fans to see is that this fight will hopefully be the warm-up for Joshua before he faces Fury.
According to The Athletic, contracts between the two fighters are being finalized for the bout to take place on Saturday 25th September 2021.
Usyk, however, is definitely not a boxer to be taken lightly, as the Ukrainian has made history in the past when he became the fourth male boxer in history to simultaneously hold the WBA, WBC, IBF, and WBO titles.
This and the fact that he is undefeated means that it is hard to pick a winner, despite the bookmakers seeing Joshua as the favorite for now.
The heavyweight division is full of some talented boxers at the moment and this is just one of many big fights to happen in 2021. If Usyk did surprise the majority, he could come away with all of Anthony Joshua’s belts that he currently holds.
With Fury currently holding the WBC title, there is a lot on the line between Joshua and Usyk and in their next couple of fights, we will probably know who the undisputed heavyweight champion of the world is.
Hopefully, the fight keeps up to its expectations as a lot of people, especially those from Britain, will be keen to see Joshua back inside the ring in front of a full crowd again.